Share
Sheikh Zayed Grand Mosque is a place no one dares to miss when in Abu Dhabi, the capital of the United Arab Emirates. The majestic structure pictures what contemporary Islamic architecture is all about. With the capacity to hold almost 40,000 worshippers, Sheikh Zayed Grand Mosque is undeniably UAE’s largest mosques and one of the world’s biggest. This massive work of art houses 82 domes and more than a thousand columns. The highlight of the main prayer hall is its chandelier, one of the world’s largest which measures 10 meters in diameter, stands 15 meters in height, and weighs twelve tonnes. The mosque’s carpet, on the other hand, is one of the largest hand-knotted carpets in the world. 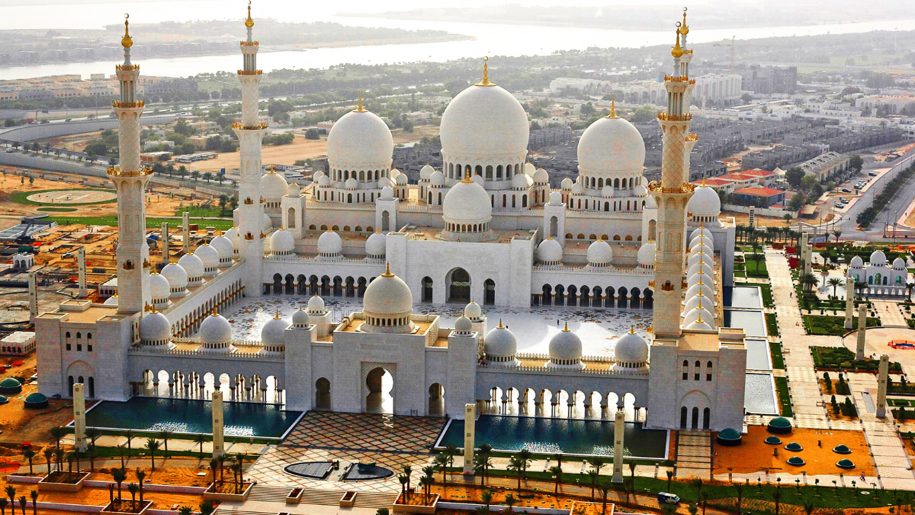 As the country’s grand mosque and one of the busiest buildings in UAE, the Sheikh Zayed Grand Mosque Center has become not just a place for Friday gathering and Eid worship but also a learning and discovery center for visitors and students. The splendor and magnificence of the mosque are open for everyone to witness and appreciate. If you are planning to visit, you may opt to get the service of a tour guide or simply go there and be consumed by its tranquil atmosphere and enchanting architecture. 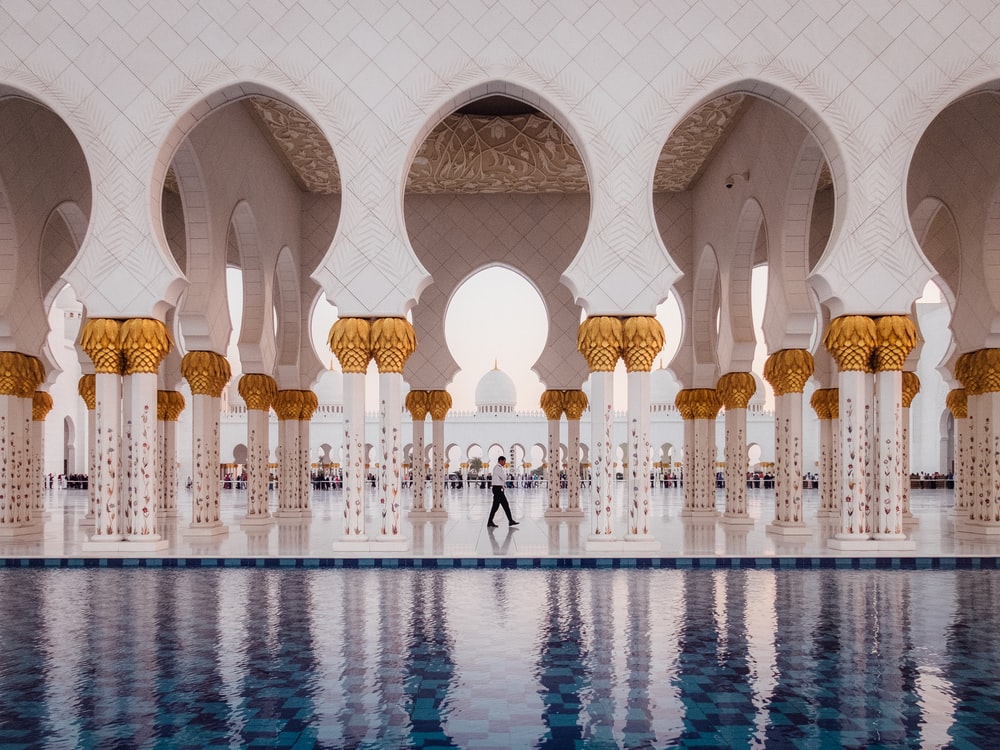 The grand mosque makes use of the highest materials sourced around the globe, including Germany, Pakistan, Italy, India, Morocco, Turkey, Iran, Malaysia, China, New Zealand, Greece, UAE, and the United Kingdom. Natural materials such as marble, crystals, ceramic, semi-precious stones, and gold were chosen for the grand mosque’s construction due to the materials’ durability and classic appeal. 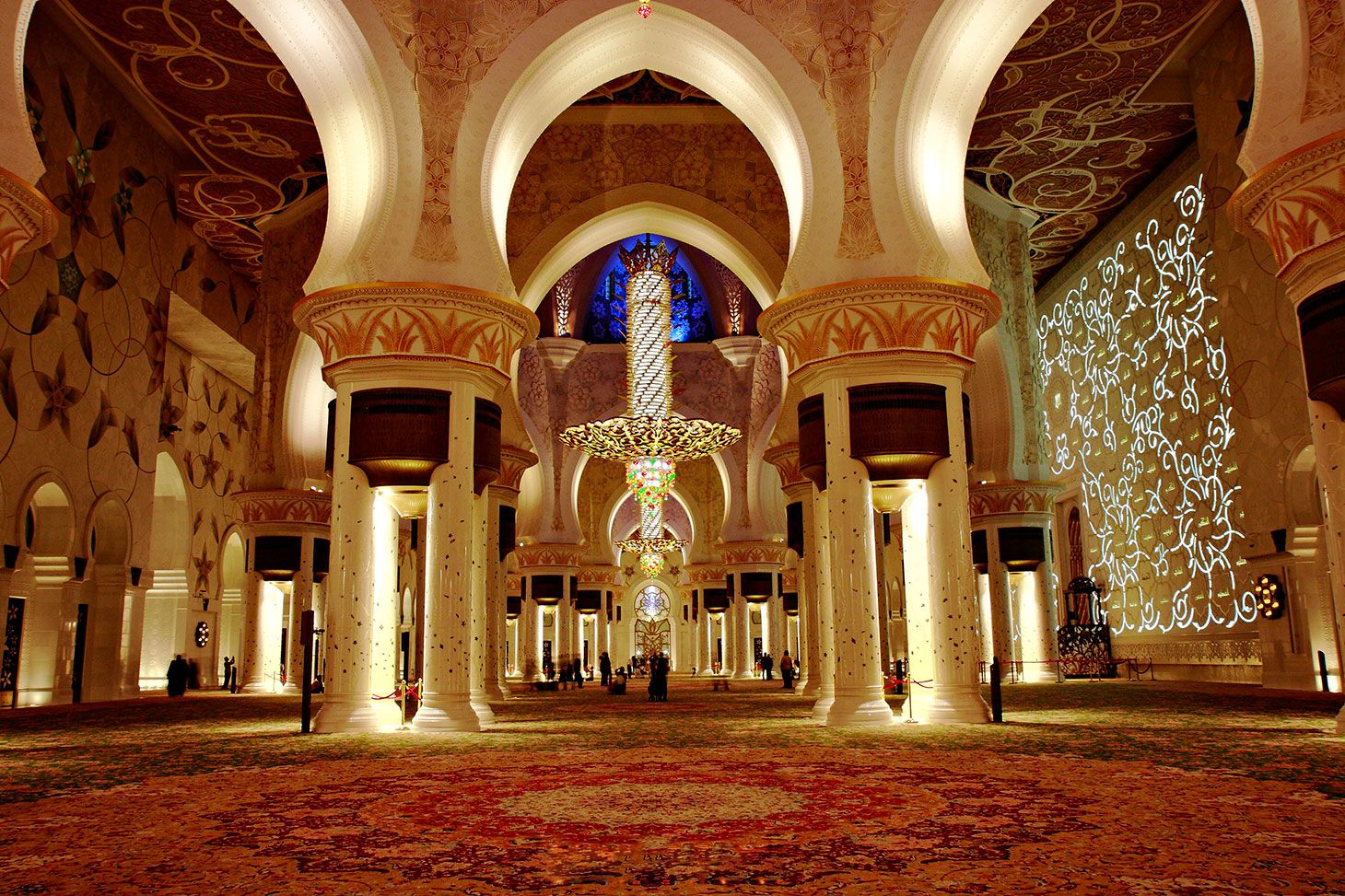 The special elements inside the Sheikh Zayed Grand Mosque are simply attention-catching. The world’s largest carpet from Iran’s Carpet Company is found in the grand mosque. Designed by Iranian artist Ali Khaliqi, the carpet measured 60,570 sq ft and was hand-knotted by around 1,300 carpet knotters. 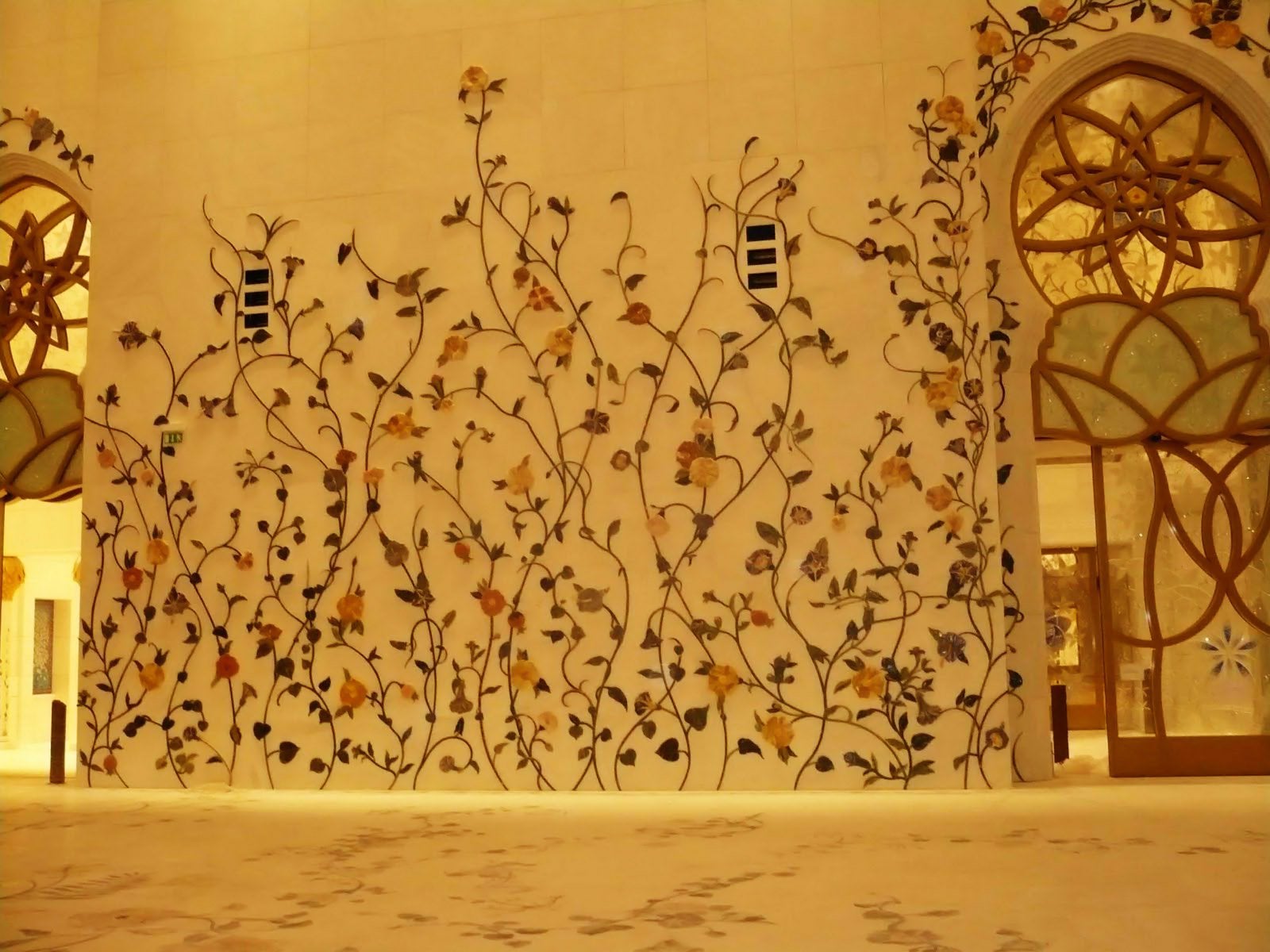 Sheikh Zayed Grand Mosque makes use of seven chandeliers made from millions of Swarovski crystals and imported from Germany. The prayer hall has 96 spectacular columns clad with marble and accentuated with mother of pearl. The pools along the arcades reflect the mosque’s columns that create a breath-taking sight at night. The one-of-a-kind lighting system is used in the grand mosque and designed by lighting architects Speirs + Major. This white massive mosque is home to the world’s largest marble mosaic in the courtyard. 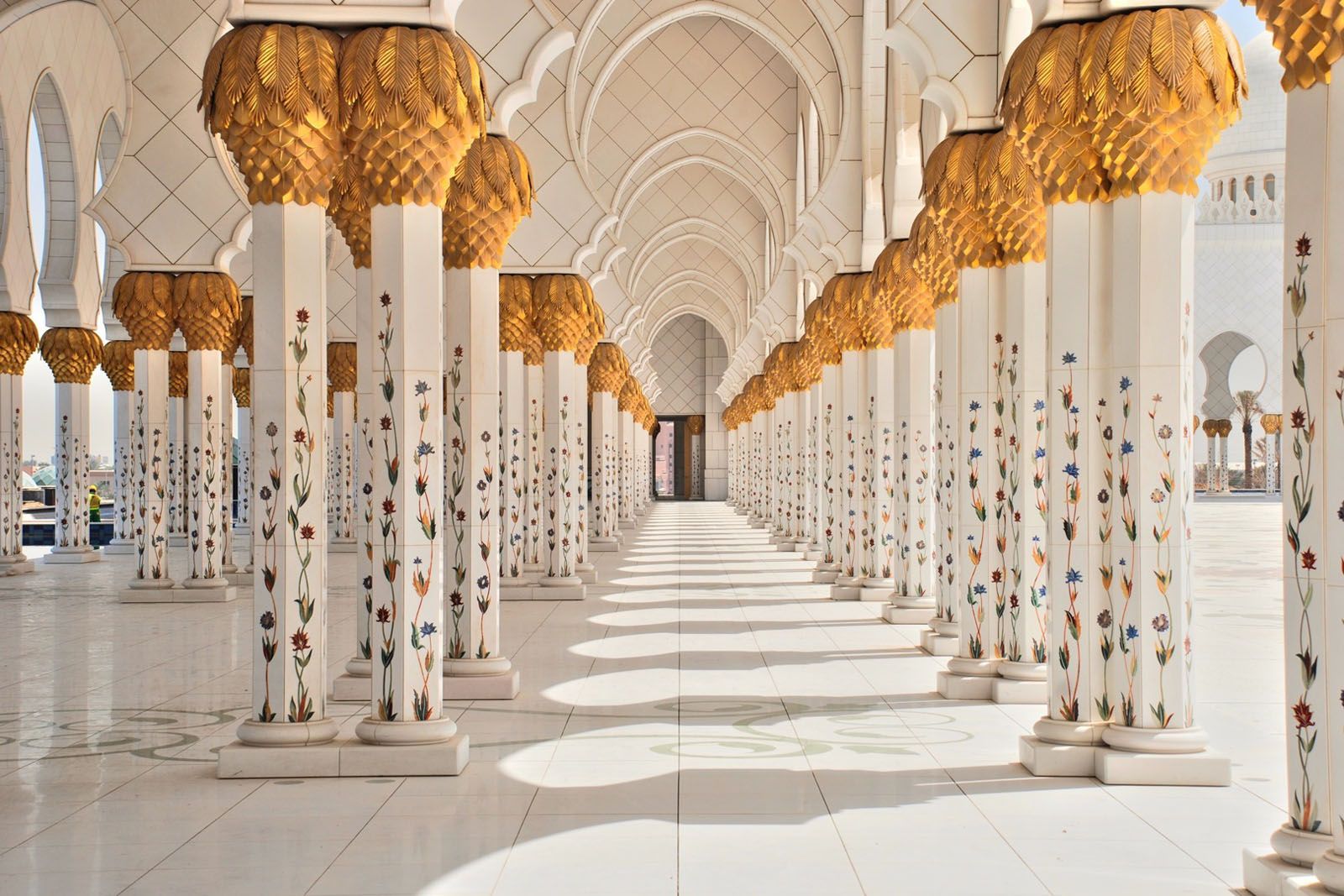 Three dozen design companies were employed to raise the grandeur of the Sheikh Zayed Grand Mosque and because of that, it becomes the most expensive mosque in the world. Visitors are delighted with the free entrance to the mosque. If you are planning to visit, take the official tour so you can go beyond the velvet ropes. Sunglasses will be useful to you because the white marble’s bright reflection can be blinding. Since the grand mosque attracts a lot of tourists, it is advised to arrive early in the morning to avoid the crowds. 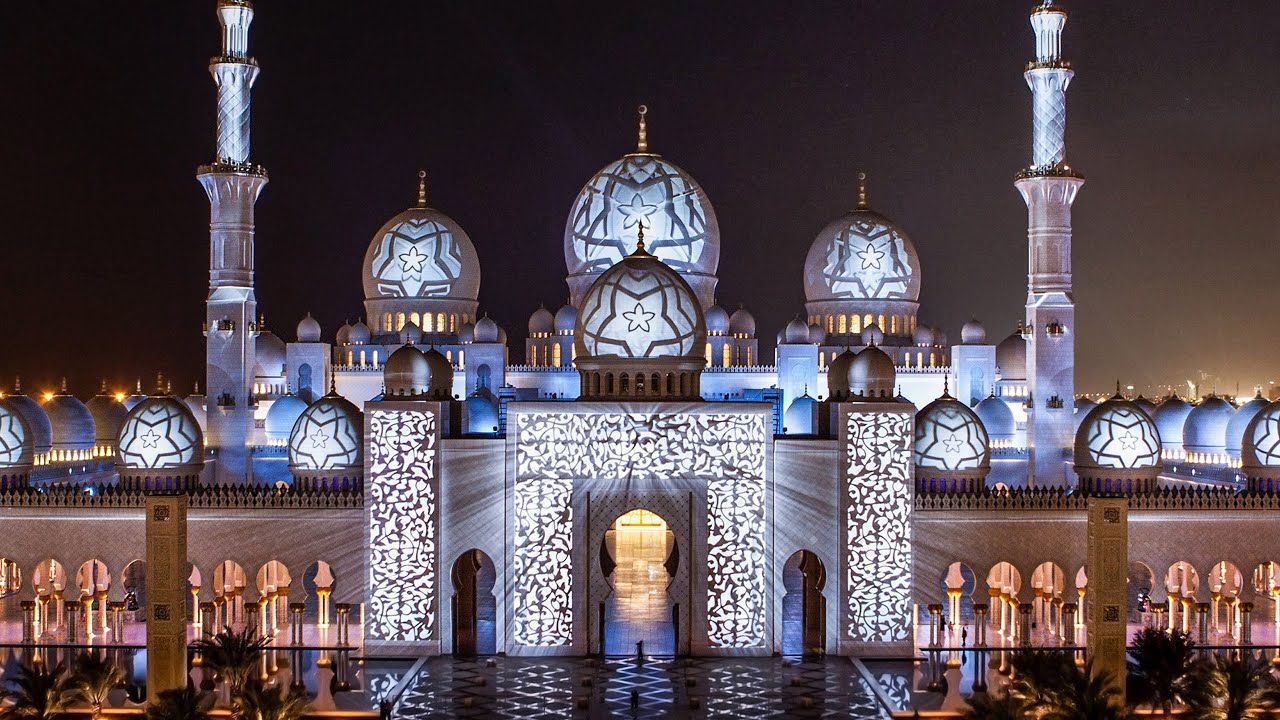