The Colosseum, in the valley between the Palatine, Esquiline, and Caelian Hills, is now the emblem of Rome. Despite much damage by fires, earthquakes, and looting, it has survived the centuries and is still impressive today for its literally colossal measurements. It could accommodate over 70,000 spectators to watch gladiatorial contests, animal hunts, and naumachiae (mock naval battles). The Amphiteatrum Flavium did not acquire the name Colosseo until the Middle Ages, probably because it was situated close to the colossal statue of Nero, which was 20 m (66 feet) high. Vespasian began building the largest amphitheater in the Roman world in A.D. 72, on the site of an artificial lake that had been in the grounds of the Domus Aurea, Nero’s imperial palace. 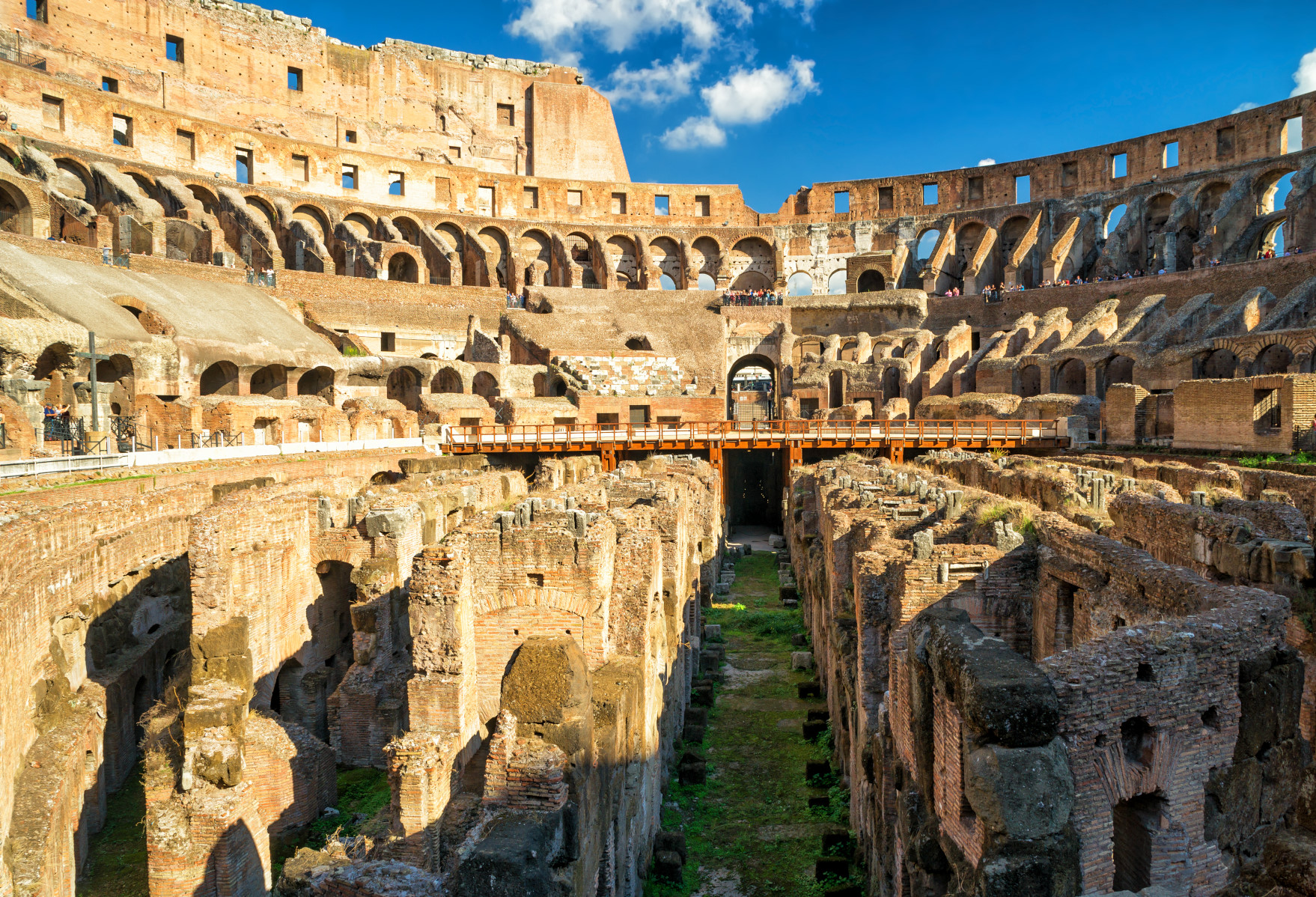 When the Colosseum was inaugurated by his son and successor Titus in A.D. 80, the occasion was marked by festive games lasting one hundred days in which 5,000 animals were killed. The elliptical building measures 188 m (617 feet) along its lengthwise axis and 156 m (512 feet) along the transverse axis. Only about two-thirds of the exterior encircling structure (height 50 m (164 feet)), built entirely of travertine, is still extant. 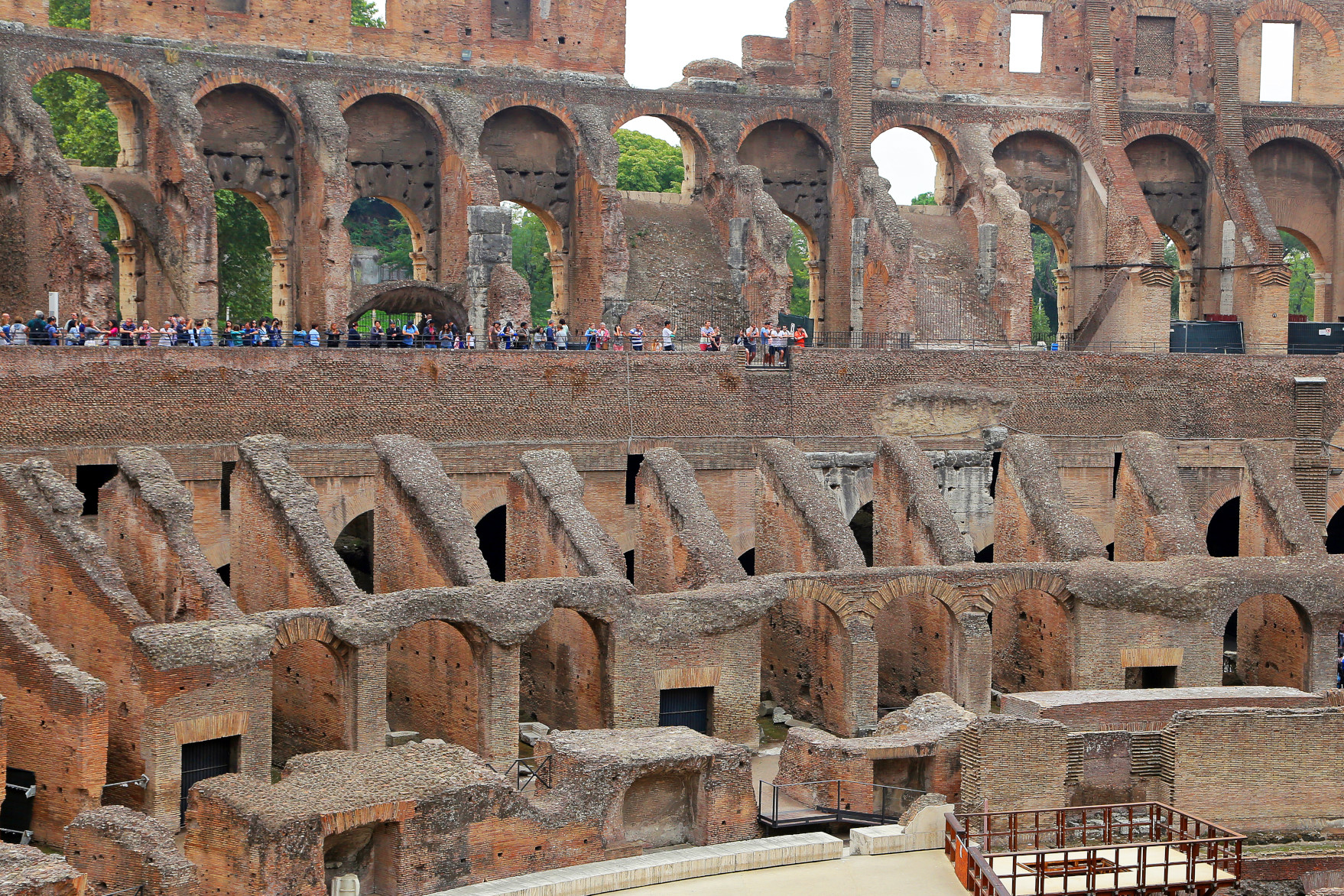 The building has four stories, and each of the three lower floors consists of 80 arcades, with half-columns of different orders in front of them — Doric on the first floor, Ionic on the second, and Corinthian on the third. The fourth floor has the structure of an attic story divided up by Corinthian pilasters, with a rectangular window in every alternate section of the wall. Poles to hold the awning that could be stretched over the Colosseum when necessary were once placed in the holes above the consoles. 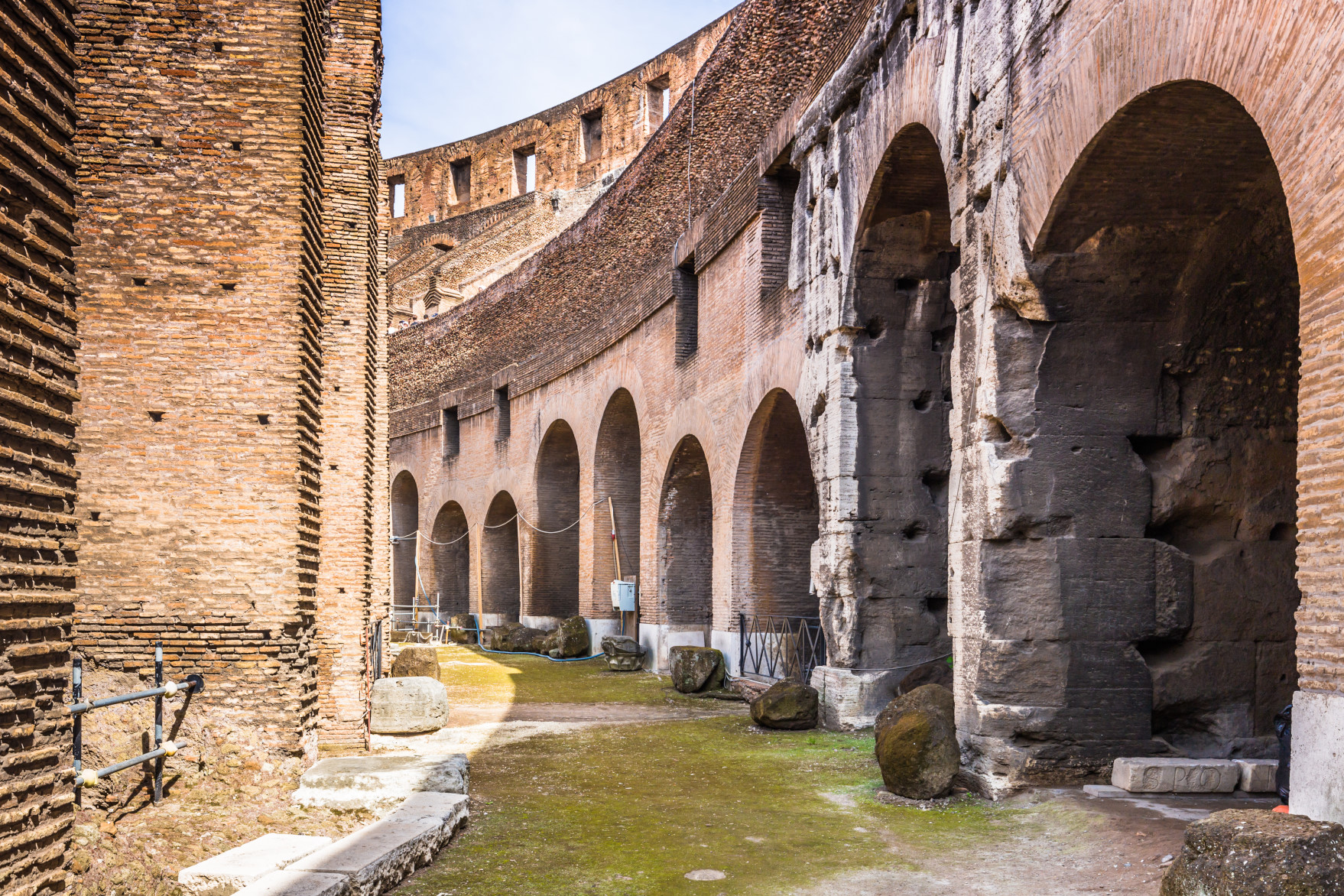 The Interior of Colosseum

Access to the Colosseum was regulated by a well-planned system. Except for the four entrances on the main axes, which were reserved exclusively for privileged persons, all the archways of the arcades on the ground floor were numbered. These numbers matched those on the spectators’ entrance tokens (tesserae), so that they could easily find their seats, and the auditorium could be rapidly cleared in an emergency. A cleverly devised system of barrel-vaulted passages running around the building, with flights of steps and ramps radiating from them, made quick access possible to any level and to the correct row of seats on it.

The auditorium was divided into five circles, one above another. Entrance to the auditorium was free, but the levels were allotted to distinct groups of the population in accordance with the class structure of ancient Rome. Members of the senatorial class sat directly in front of the arena, with seats of honor at the axes for the emperor and his family, officers of state, Vestal Virgins, and priests. The second level was for knights and the third and fourth levels for other classes. The top-level was reserved for the women spectators. The seats in the first four levels were all constructed of stone, whereas those in the top-level were made of wood. 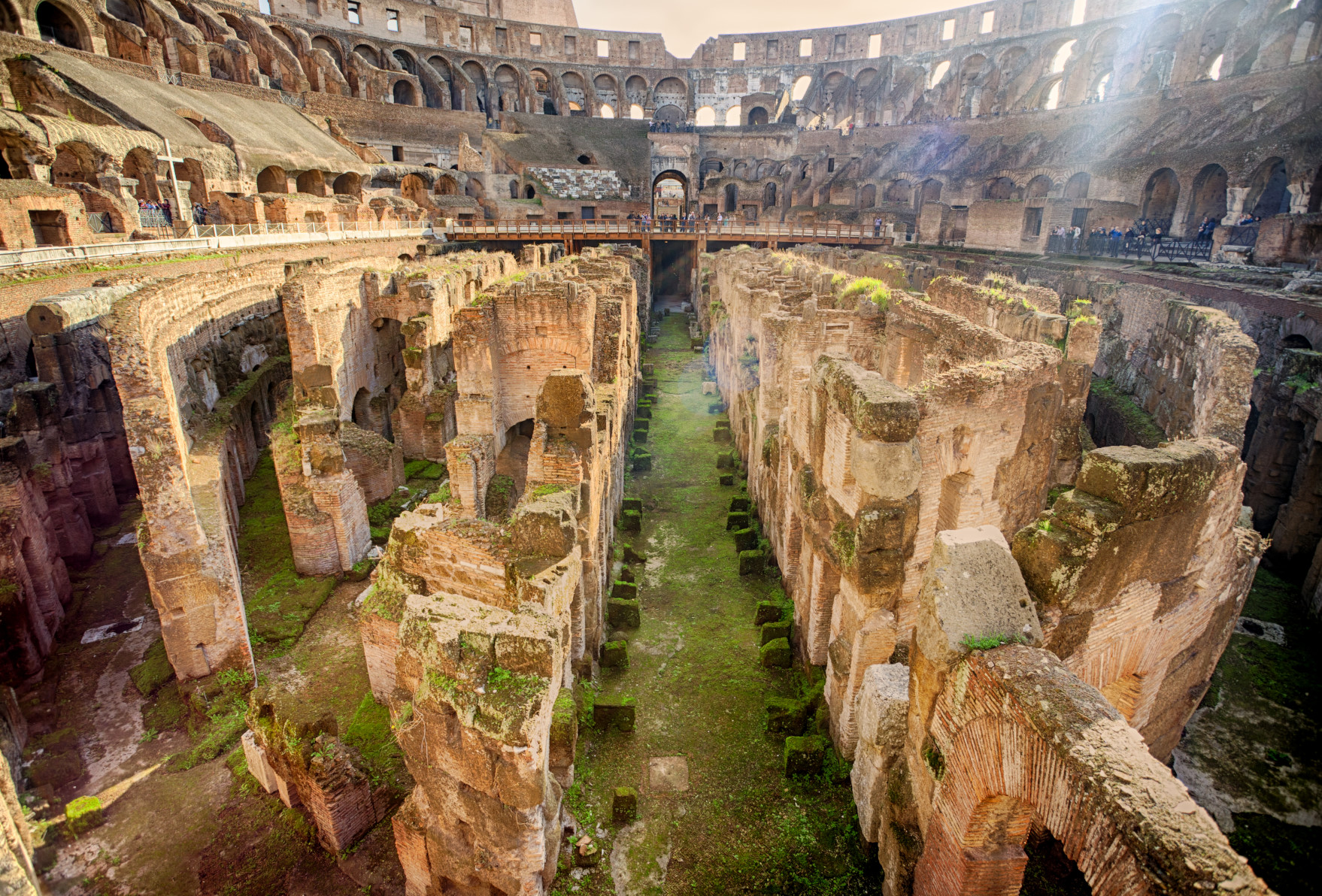 The basement below the arena, which measured 78 by 46 m (256 x 151 feet), was covered with wooden planks and contained all the equipment necessary for the games: dressing rooms, stage machinery, cages used for housing the wild beasts, and weapons. The thirty niches in the underground enclosure wall had small tackle blocks fitted in them to winch wild beasts and gladiators up to the arena. With the aid of a system of pulleys and counterweights, all kinds of scenery could be lifted up into the arena over sloping ramps, so that a landscape setting of hills or woods could be created for animal hunts. Today, the underground of the Colosseum is opened to visitors with the arrangements made by the Italian Ministry of Culture. You can visit the underground chambers by booking a Colosseum underground tour.

The Roman people were able to satisfy their hunger for panem et circenses (bread and circuses) in the arena until the year A.D. 523. The last known games were held under the reign of the Ostrogoth king Theodoric (A.D. 473-526). The Colosseum lay abandoned during the Middle Ages, and only an apocalyptic prophecy by the Anglo-Saxon monk Bede recalled its former importance: “Rome will stand as long as the Colosseum stands; if the Colosseum falls, Rome will fall, and if Rome perishes the world will end.” In the Middle Ages, the noble Roman family of the Frangipani was responsible for converting the Colosseum into a fortress, and later, like many other ancient buildings, it was principally used as a stone quarry. It was only when the monumental building was made into a memorial to Christian martyrs in 1744, and a bronze cross erected in the arena, that it was preserved from further depredations. In the near future, the underground passages of the arena will, however, no longer be exposed, but will be covered by a wooden floor as they were in classical antiquity.