Sri Lanka is a fascinating land of diverse cultures, UNESCO World Heritage Sites, and awe-inspiring natural scenery. The island country is jam-packed with incredible activities for all travelers and it’s a challenge picking your first adventure.

Join a spiritual pilgrimage, chase waterfalls, visit glorious temples, or simply relish the laid-back vibe. If you’re planning a trip to Sri Lanka, check out this list of eight places to include in your itinerary. 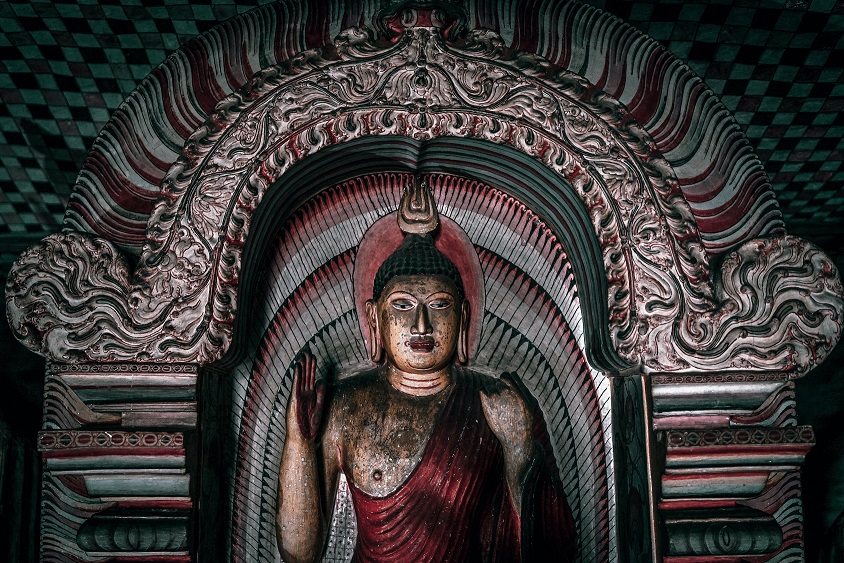 This ancient palace is a brilliant representation of city development using the elements of Mother Nature. A UNESCO World Heritage Site and often dubbed the Eighth Wonder of the World, Sigiriya Fortress dates to the 5th Century AD when it was designed as an elaborate capital.

The complex was built on top of an enormous rock column nearly 200 meters above the jungle. A stone lion guards the entrance to the abandoned city and its walls are decorated with gorgeous frescoes.

Once you reach the ruins, you’ll find a network of gardens, pools, and other fortifications.

Standing at 2,243 meters, Adam’s Peak is a cherished pilgrimage for many Sri Lankans. Sri Pada sits just below the mountain’s peak and holds religious significance for several faiths of the island.

Buddhists believe the rock formation to be the Buddha’s footprint, Hindus claim the footprint belongs to Lord Shiva, and some Christians and Muslims believe it was Adam’s first step after being cast away from the Garden of Eden.

Pilgrims climb to the sacred footprint at night for jaw-dropping views of the surrounding scenery at dawn. Trekkers must conquer thousands of steps, but the rugged staircase is illuminated if you hike during the pilgrimage season.

At 220 meters, Diyaluma Falls is Sri Lanka’s second tallest waterfall. Intrepid travelers up for an exciting hike are greeted with insane panoramic views from the top of the tumbling falls.

A tuk-tuk ride from Ella takes you to the starting point of the trail that leads to the upper falls. The heart-racing scenery of the dense forest and rolling hills is one of Sri Lanka’s most dramatic sights.

Cool off at lower Diyaluma Falls by going for a swim in the cliffside infinity pools overlooking the valley.

Kandy Lake is a man-made lake that was constructed in 1807 right beside the Temple of the Tooth. A stroll around the lake offers a peaceful escape from the urban sprawl and picturesque views of Kandy’s scenic hills. There are seats scattered around the lake where you can rest your feet or listen to birds chirping in the trees.

Joggers use the shaded path for exercise, and lively vendors sell snacks and souvenirs on the lake’s edge. There is an island in the lake steeped with local folklore, and you can go for an enchanting boat ride for a closer look.

Temple of the Sacred Tooth Relic

Located in Kandy, the Temple of the Sacred Tooth Relic houses the most illustrious Buddhist artifact in Sri Lanka. The Buddha’s tooth is stored inside a gold casket, and prayers are made to the relic three times daily.

The lavish temple complex was the royal temple for the former Kingdom of Kandy and is decorated with intricate shrines and murals. Thousands of worshippers visit the temple to make offerings known as pujas.

Tours in Sri Lanka will allow you to witness the ceremonial prayers, but you must follow the dress code. Your legs and shoulders must be covered, and no shoes are allowed inside.

Galle Dutch Fort is a UNESCO World Heritage Site dating to the times of European colonialism in Sri Lanka. Originally built by the Portuguese in the 16th century, the fort was captured by the Dutch and underwent extensive modifications.

The fort became the epicenter of the spice trade and the town was built within its walls. By taking the Fort Walk, you’ll pass historic structures of the complex like the Old Gate, bastions and ramparts.

Roughly 45 miles north of Kandy, the Dambulla Cave Temple is the most sophisticated cave temple complex in Sri Lanka. Buddhist hermits occupied the caves in the first century B.C. and the caves are decorated with murals and statues.

The temple consists of five sanctuaries that contain over 150 statues of Lord Buddha and masterful paintings lining the ceiling. Although the exquisite artwork transformed the caves into a beloved historic site, the remains of ancient Sri Lankans have been discovered within the complex.

After exploring the network of caves, climb the rock tower for unbelievable views above the surrounding area.

Gangaramaya Temple is one of Colombo’s most sacred Buddhist temples that stores an intriguing mix of artifacts and statues. Once a modest complex near the tranquil Beira Lake, the temple is revered for its dynamic architectural styles. Sri Lankan, Chinese, Indian, and Thai influence can be spotted in various places in the temple’s design.

Golden Buddha statues guard the doorway to the main place of worship and the grounds display various lion and nymph figurines. The museum stores additional Buddha statues and various relics from around the world.

Also, Gangaramaya Temple is an educational center that teaches Buddhist principles and helps those within the community.